Angela McClure
Born and raised on a Wyoming cattle ranch, Angela Kincaid McClure had to grow up fast following the death of her mother at a young age. An only child, she has been the lone woman on the Circle Bar K for most of her life, and her father has always discouraged fraternization with the cowboys employed on the ranch. Angela married her high school sweetheart, Cody McClure, and enjoyed a very happy marriage, raising two sons who have no interest in ranching. With her father aging rapidly, Angela and Cody took over the running of the ranch until Cody was killed in a fall from his horse. Recovering from his loss has taken some time, but after two years, Angela’s interest is once again focused on male companionship. Unfortunately, no one seems the slightest bit interested in taking on her forty-two-year-old self or the ranch. Her father believes she should marry the ranch foreman, Rufus Bentley, but though Angela had a crush on him in her youth and the sixty-year-old foreman is still attractive, his total lack of personality and stern attitude leaves her cold. She’s had her eye on Dusty Jackson, a handsome cowboy employed on the ranch, but she has never received the slightest hint that he might see her as a love interest. Love-starved and lonely, Angela finally finds solace when she picks up stranded rodeo cowboy Troy Whitmore and makes him an offer he can’t refuse.

Dusty Jackson
Born Dustin David Jackson on a ranch in eastern Wyoming, Dusty has never been anything but a cowboy.  Something of a loner, after graduating high school, he drifted from ranch to ranch, eventually ending up on the Circle Bar K. He likes the people he works with but there are other reasons for staying on, and just as many reasons to leave. Blessed with good looks and a ready wit, he’s more than a match for the men he works alongside, but when he’s around Angela McClure, words fail him. He knows exactly what he wants, but he also knows that once he takes that first step, there will be no turning back.

Troy Whitmore
Troy Whitmore was born and raised on a ranch in western Oklahoma. He could ride almost before he could walk and was winning prizes at the junior rodeos by the age of six. Too handsome for his own good, women have always been plentiful, but with a tendency to hop from woman to woman and live just a teensy bit beyond his means, by the age of thirty, he needs a woman with enough money to sponsor his rodeo career. When his last “sponsor” dumps him on the side of the highway while en route to the rodeo in Jackson Hole, he’s picked up by Angela McClure, a forty-something widow with an eye for a handsome cowboy and an imagination that fills in where reality leaves off. He’s more than willing to add the perk of sex with the boss to his new job on Angela’s ranch, but soon discovers that the rodeo circuit isn’t the only place where he faces some stiff competition.

How old were you when you had your first kiss? Tell us about it!
Angela: I was seventeen. Cody kissed me after the last performance of our senior play. He was tall and handsome, and I melted in his arms!
Dusty: I was fourteen. She sneaked up behind me and stole the kiss before I had time to react.
Troy: I was ten. She was twelve, and neither of us knew what we were doing. It was a bit messy, actually. 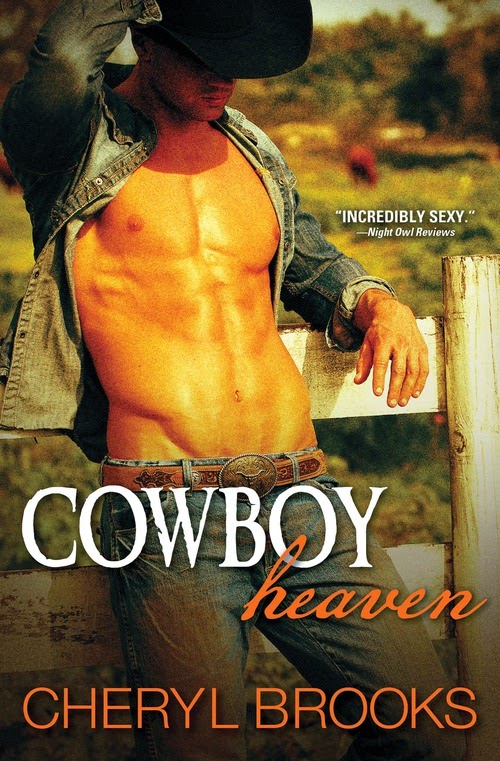 When you find yourself in cowboy heaven...
When lonely widow Angela McClure hires a gorgeous hitchhiking cowboy with an affair in mind, she knows they’ll have to be discreet: her old-fashioned father and the stern ranch foreman adamantly discourage any interaction between her and the ranch hands.

Things can get hot as hell...
Despite their attempts at secrecy, the heat between them is undeniable. To divert suspicion, Angela forms a new plan: she’ll flirt with all of the ranch hands. Suddenly Angela has a whole stable full of sexy-as-sin cowboys to play with, but only one can win her heart.

Cheryl Brooks is a former critical care nurse turned romance writer. Her Cat Star Chronicles series includes Slave, Warrior, Rogue, Outcast, Fugitive, Hero, Virgin, Stud, Wildcat, and the newest release, Rebel. She is a member of the RWA and IRWA and lives with her husband and sons near Bloomfield, Indiana.

Praise for Cheryl Brooks:
“Really sexy. Sizzling kind of sexy. Honestly, only Cheryl Brooks can deliver a line like, ‘I can give you joy unlike any you have ever known’ and make you want to melt.”
—Bitten by Books
“Ms. Brooks delivers plenty of sexual tension, suspense, and pleasure in simply being alive.”
—Romance Junkies
“Incredibly sexy and wonderful to read all around.”
—Night Owl Romance
“Fun…unique…and wicked sexy! Cheryl Brooks knows how to keep the heat on and the
reader turning pages!” —Sydney Croft

Getting stranded has never felt so good…
Lauren Allen is on her way to meet her future in-laws when her car breaks down on a scorching, dusty Texas highway. There’s no shortage of handsome cowboys turning up to save the day, but she puts her trust in local rancher Steve Williams. From the moment she shakes his hand, his warm, calloused grip makes her hotter than she knows what to do with…

Posted by Naughty Book Eden at 9:30 AM
Email ThisBlogThis!Share to TwitterShare to FacebookShare to Pinterest